Our Chianti Colli Senesi is produced with grapes coming only from our vineyards. The production rules say to use at least 75% Sangiovese, it is possible to use all the grapes allowed in Tuscany included the white ones. 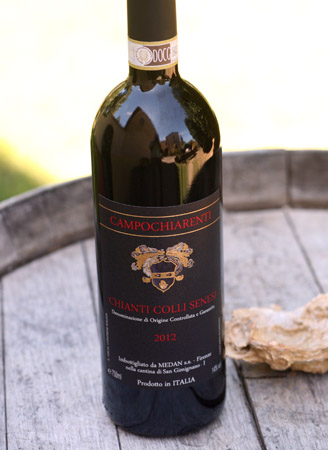 We use 85% Sangiovese with some autochthonous varieties as Colorino, Canaiolo, Ciliegiolo, Mammolo, Foglia Tonda. The harvest day is defined with daily tasting in the vineyards and analytical analysis. Every variety is picked up at the ideal ripening and vinified separately, because it needs different vinification process to obtain the best wine.  Fermentations are done in traditional way with delestage and pumping over , then are followed by a long maceration time in order to extract all the best from the grapes. At the end the blend is done and the Chianti Colli Senesi lasts in cellar until the bottling day.

It is possible to sell Chianti Colli Senesi  since the 1st March after the harvest, but complexity and structure of our wine suggest a longer refining in cellar, and often it is done also in big oak (botte grande), in order to have a rounder wine when we start the selling.

The clarification is naturally done without using chemical products, so the wines are natural and cannot cause any allergy problem. The use of natural fining process could result in a small deposit in the bottle during aging, that shows how much the wine is natural but also that it is still alive and can evolve towards the peak during the aging.

The work done in vineyard selecting varieties and clones allow to get a Chianti Colli Senesi really enjoyable, because of the freshness and the fruity. At the same time the very good body and the structure allow an harmonic evolution for many years.